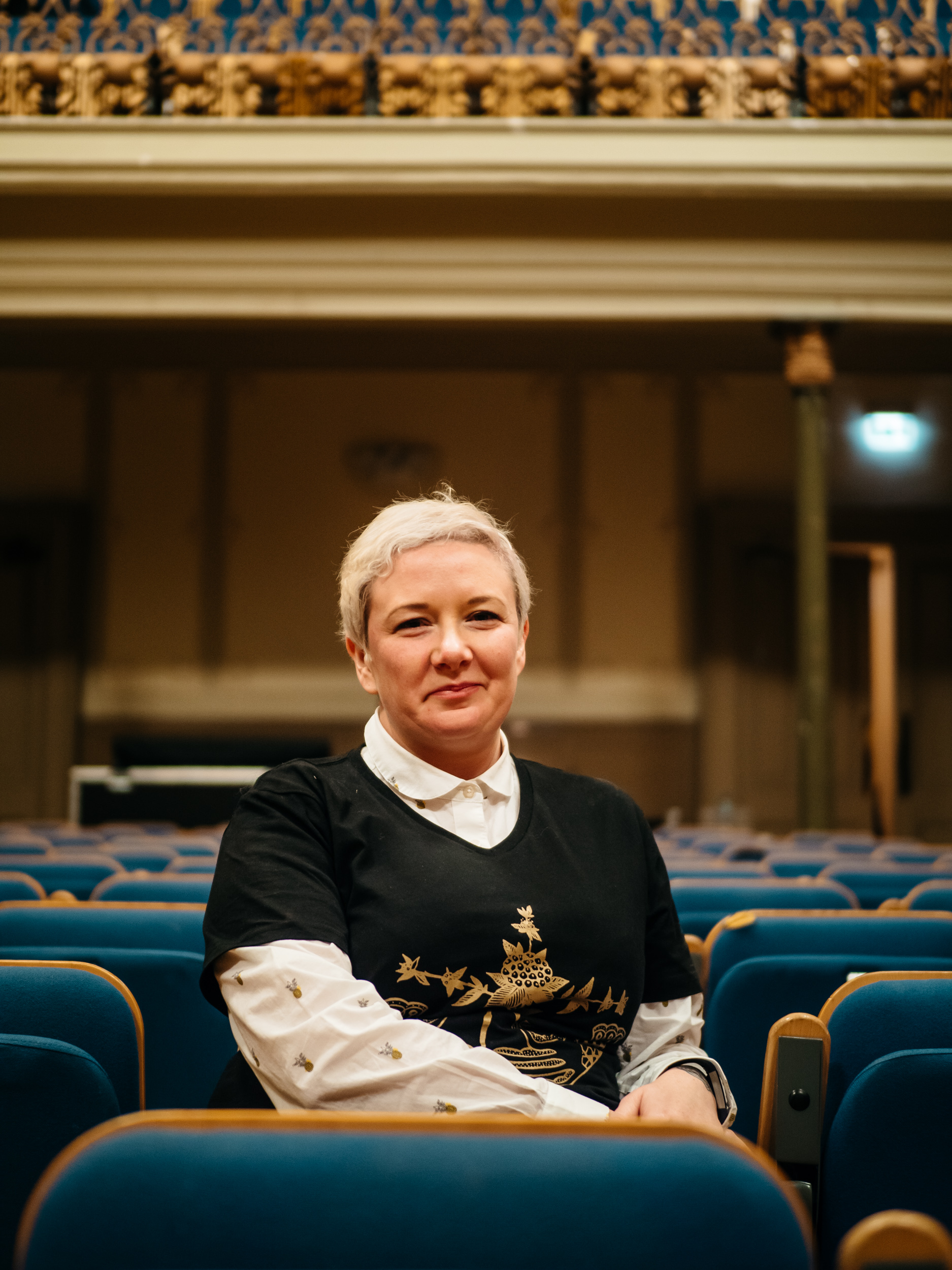 “It is worth noting that two of the artists who have regularly produced works on abortion, Emma Campbell… and Helena Walsh… combine artistic practice and activism and pay much attention to process and reception, working with women involved in support to abortion and
eliciting a dialogue with the viewers.” (Morrison, 2021, p184)

Emma Campbell is an activist-artist in the completion stages of her PhD on utilising art, primarily photography and performance, as a sexy & magical tool for abortion rights along with Alliance for Choice of whom she is a co- convenor. Her practice is embedded in queer & feminist art and activism. Previously focusing on the issues raised by the lack of abortion access on the island of Ireland and attitudes fostered by colonialism and deep religious conservatism, she makes work that is image-based (photography and collage), participatory, performance-enhanced and active in affecting change.

Emma Campbell gained her Documentary Photography BA (Hons) at U.W.C.N Newport in 2001, an MFA in Photography at Ulster University in 2012, and continues her practice-based PhD addressing photography as an activist tool, an artist practice and as reflexive academic inquiry in the movement for abortion rights. Inspired by practices employed by the women photography collectives in her historical research, she employs archive images, documentary, film, group performance, found images, street art and collage. For her forthcoming practice supported by University of Atypical she is using photography and sculpture to create a series of pre-Christian-esque artefacts which reimagine fantastical queer feminist icons. Emma collaborates frequently with Irish artist Siobhán Clancy and is co-convenor of Alliance for Choice. Emma has exhibited in solo shows in Belfast, Dublin & Berlin and in group shows in London, Liverpool, Donegal, Dublin, Belfast, Stockholm, and Bangkok as well as street art and online.1

Emma is also on the Board of Directors for Outburst Queer Arts, HereNI and The343 Queer Feminist space. For her forthcoming practice she is creating a series of celtic–feminist-fantasy artefacts & portraits which concoct fantastical queer icons. Emma has exhibited in solo shows in Belfast, Dublin & Berlin and in group shows in London, Liverpool, Donegal, Dublin, Belfast, Stockholm, and Bangkok as well as street art and online. Emma gained her Documentary Photography BA (Hons) at U.W.C.N Newport in 2001, an MFA in Photography at Ulster University in 2012 and worked as a professional photographer and picture editor in London for over a decade for orgs such as the BBC, The Times London and Network Photographers.

Photography books by the artist

Written by the artist

Power, exercised as control, has blighted the reproductive rights of humans worldwide for centuries.

National ideals of motherhood and acceptable female behaviour are threaded through anti- choice arguments. To represent the ‘abortion journey’ experience, in effect it becomes the “fulcrum of a much broader ideological struggle in which the very meanings of family, the state, motherhood, and …women’s sexuality are contested”.[1]

The polemic surrounding abortion is bewildering. Ambiguity and conflict are played out in the passing landscapes and impersonal details of the journey to the clinic overseas, echoed by the political bluster and suffocating reality of the legal constrictions. Layers of glass and reflection acknowledge the obfuscatory and morally indignant language used by politicians and anti-choice campaigners.

The enforced exile across the sea to the former colonial bosom, shrouded in secrecy and shame, is still one of the few options for women in the island of Ireland.

All of these photographs were made sitting by windows during journeys to abortion clinics in Liverpool and London. 5

On 11 June 2001, Women on Waves (W.o.W.) set sail from the Netherlands for Ireland, a country with the most restrictive abortion law in Europe.

Five days later, over 300 women had called the ship’s hotline. Women who had been raped, schoolgirls, mothers who could not pay for childcare or a journey to England, political refugees who did not have travel documents and many more. W.o.W. counselled women with unwanted pregnancies, did pregnancy tests, ultrasound scans to establish pregnancy dates and provided information about and distributed contraceptives.

Today Women on Waves also operates as Women on Web, distributing the abortion pill to women in countries like Ireland and Northern Ireland where abortion is still almost impossible to access legally.

After being given access to the W.o.W. archives in March of this year, I began to work with these images, wishing to acknowledge the colonial and religious factors preventing access to abortion. Thanks to post-1861 images from the National Library of Ireland and the British Library, I was able to combine all three.

This work is currently being shown as part of A Bigger Picture – Queer/Feminist Photo Survey – Golden Thread Gallery Belfast curated by Clare Gallagher, Clare Gormley and Anna Leisching. Also as part of Collage: A Political Act (2022) at the Ulster Museum, Belfast. 6

Both colour photography and the laws against abortion in Ireland were first introduced by the British in 1861, in an era of women’s suffrage. Much like photography, the movement that would evolve into feminism was a product of modernity; photography embodied the new obsession with empirical evidence and visual culture whilst the suffrage movement was a cry for recognition and equality, against the backdrop of new widespread industrialisation and the resulting slum conditions that fostered growing political awareness amongst women and workers. Butterflies are often regarded as symbols of freedom and change by many cultures, their capture and collection can reflect the harsh and sometimes fatal consequences of trying to pin down sexual behaviour and confine people to rigid gender stereotypes. It also echoes the Victorian patriarchal and colonial attitudes that attempted to categorise and control nature, to codify behaviours, quantify and objectify in the name of scientific ‘reason’.

An Appropriate Hobby encompasses the legacy of suffragette struggle with contemporary feminism, it links up the new picture technologies utilised for popular apps such as Instagram with Victorian categorisation and references the first ever colour photograph. It also overlays the issue of bodily autonomy, central to contemporary feminism, onto ideas within dominant patriarchal discourse about appropriate gendered sexual behaviour. Importantly, it also allows the abortion rights movement to take back the visual terrain without demuring. 7

This is a new project featuring portraits of queer people in Belfast, including drag performers, activists, performance artists and those embracing a hopeful queer existence in community.

Inspired by queer feminist science fictions, which centre fantasies where power is subverted and magic is reimagined, I will create queer, disabled, body positive & inclusive ‘artefacts’. Informed by pop, punk, queer and feminist repurposing of divine beings, I aim to visualise rituals for gender queer and non conforming deities that elicit those destroyed by churches and institutions of capital. The work will ‘queer’ ancient religious rites and relics and create a world playfully subverting of the dominant narratives around our emotional and sexual lives.

As a queer person with Dyspraxia, I have a slippery relationship with physical space, time, hierarchies, sequencing and systems. The creative and chaotic approach to my navigation of temporal and institutional spaces, will be explored via an anachronistic archaeology of the future. The work wants to make fissures of joyful resistance.

My practice is embedded in queer & feminist art and activism. Previously focusing on the issues raised by the lack of abortion access on the island of Ireland and attitudes fostered by colonialism and deep religious conservatism, I make work that is image-based (photography and collage), participatory, performance-enhanced and active in affecting change.

Array Collective are a group of individual artists rooted in Belfast, who join together to create collaborative actions in response to the sociopolitical

“While artists can often write themselves into radical positions from inside the nurturing spaces of galleries, Array have reacted spontaneously and generously to the needs of their city. They have shown up on the streets and brought energy, wit, historical irreverence and a sense of the absurd to the bleak political decisions of the past decade.” (Hickey and Morrow, 2021)