An instinct for growth
Etta Gerdes 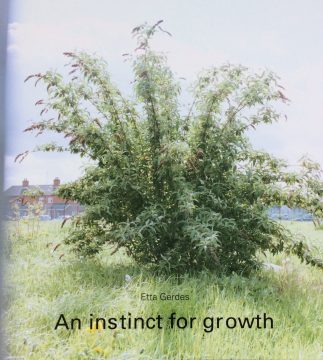 An instinct for growth is an allegory of nature and economy in Dublin, supported by the Goethe Institut. The work depicts man’s constant struggle to form his environment. It visualises the boom-bust cycle in which the economy is anti-cyclical to nature: If the economy stands still, nature blooms; if the economy thrives, nature is pushed back. Nature and economy share a common goal: a desire for growth and evolution. While the economy is a symbol for man’s aspirations to grow, nature is understood as the force that not only takes over, but which thrives when man pauses in his efforts. If this can be considered a battle between working man on the one hand, and nature with its enormous force on the other, man will win in the short term, whereas nature will succeed in the long run. Nature and economy are both cyclical. While nature pauses in winter to gain strength for the next season, the economy keeps driving forward, ever onward – until it can grow no more. Then it lies derelict until an industry begins again somewhere new. A regeneration such as this usually takes longer than one winter.

Etta Gerdes is a German landscape, nature, and architecture photographer.

Frank McDonald is former Environment Editor of The Irish Times and author of several books.