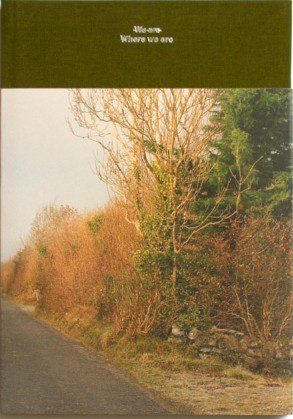 Where we are series
New Line
Robert Ellis
Aad
English

This photobook is a series which takes a year-long look at modern Ireland. A lot has been said, reported and written about Ireland in the last 5 years. Soundbites, headlines, rhetoric. A single phrase sums it up — ‘Where We Are’. A political phrase that starts where it ends, making it the perfect metaphor for talking in circles. Where We Are presented projects from 12 talented photographers. Spanning the country, the projects provide fresh, honest perspectives on the people, places and stories that make up modern Ireland. The idea is that by looking, not talking, we might get a clearer sense of where we are. The project was released as 12 small books.

New Line is a body of work that documents the space inhabited by a small alternative community in the West of Ireland. By exploring the private world created by the people that live here, this work adopts a silent and contemplative tone, and seeks to engage with this space and its inhabitants, rather than expose it. Through carefully negotiated access and many discussions, the work becomes a catalyst of my experience and the time spent making the work. Carried out over a period of over three years the images reveal the harsh depths of winter and the warm fertility of summer. The images tell the stories of the people that belong here, but only ever show a glimpse of their presence.

Robert Ellis is a graduate from DIT with a BA degree in Photography, and more recently from the University of Ulster with an MA in Photography. His photography deals with the notion of ‘home’, working with small rural communities, often relying on inherent or local knowledge to inform a sense of place.

Aad is a design consultancy based in Dublin with a focus on communication and brand design for creative, cultural, craft and civic enterprise.