some surfaces on which patterns occur
Isabel Nolan 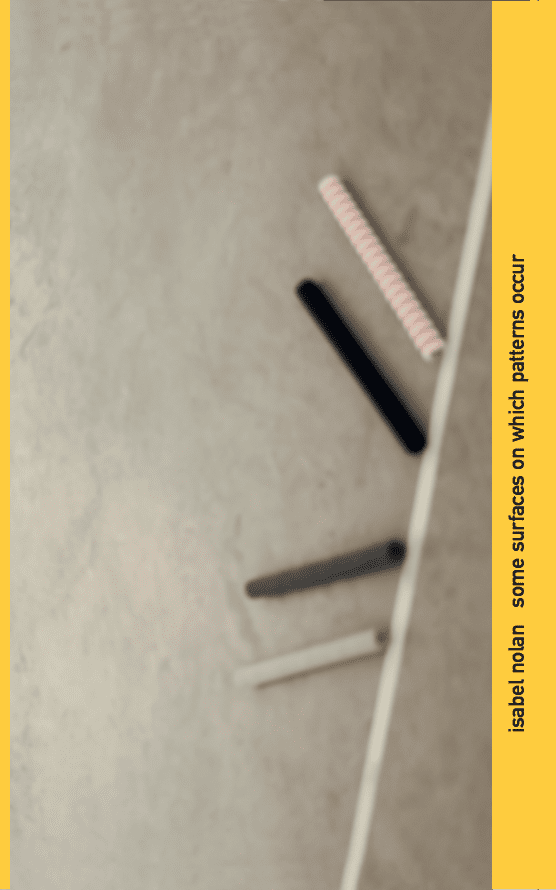 ‘Configurations of marks or things upon surfaces have a propensity to seem meaningful. Apophenia maybe? It began in Antwerp, a photograph seen in a now forgotten book. Five years later all that remained with me was the image of fabric configured into slow patterns and a name. A search uncovers Marie Lieb. Not the uncelebrated, modern artist I had conjured. Rather a psychiatric case in residential care in Heidelberg Hospital in 1894. Her legacy now cared for by the Sammlung Prinzhorn. The two photographs of Lieb’s arrangements of ripped cloth, beautiful and inscrutable, imprinted as a register of oblique decisions, a chronicle of specificity with no discernible purport.’

Isabel Nolan was born in 1974, in Dublin, Ireland. The startling objects of her art take wildly unpredictable forms, — but they are at the same time the fully consistent outcomes of a singular, searching artistic sensibility. Nolan’s works evolve out of almost scholarly processes of investigation — intensive enquiries into cosmological and botanical phenomena, perhaps, or analytical scrutiny of literary and historical texts. These contrasting means of representing reality (and of comprehending its infinitely various components) provide divergent points of departure for Nolan as she attempts to somehow account for the enduring strangeness of the world, even in its most intimately familiar forms.
isabelnolan.com

Onestar Press is dedicated to the production of books and multiples by artists. The space and freedom given to artists, the flexibility in the realisation of their concepts, the access to and use of new technologies have allowed Onestar Press to collaborate with international artists on a variety of projects.
onestarpress.com