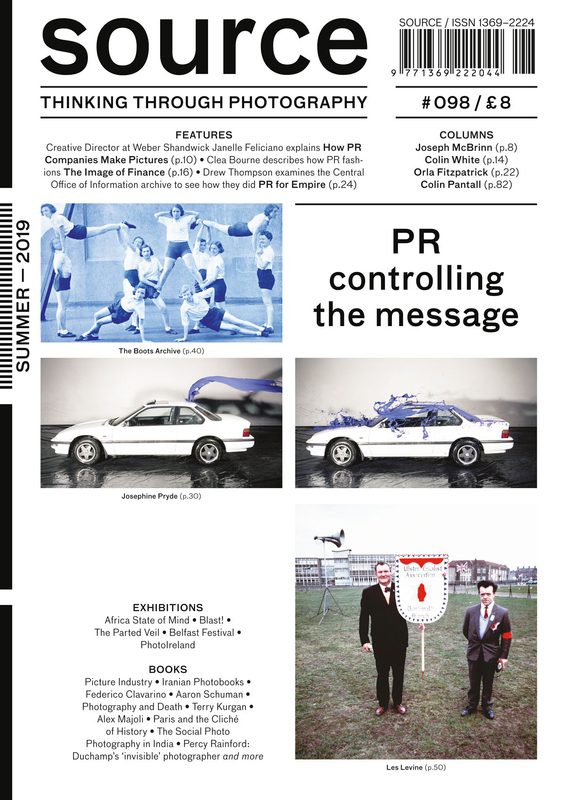 Photographs come into existence for different reasons, many of them nothing to do with the intentions of photographers. Public Relations is a profession that seeks to control the way organisations are understood, although the way this is achieved can be murky. This issue of Source aims to illuminate the influence PR has on the photographs that shape public life.

One of the most abstract, and therefore hardest to picture, parts of the economy is the finance sector. Blamed for many of our current political woes and emblematic of the inequalities in contemporary society, it would be easy to believe that the corporations in the City of London have mastered picture control. Clea Bourne is now an academic but used to work in financial PR. She explains that although finance companies can insinuate themselves into the public sphere there are as many limitations on the activities of corporate communications departments including an entrenched suspicion of appearing in photographs.

The changing media landscape and the rise of social media has blurred the distinctions between advertising and PR. Janelle Feliciano is a Creative Director in a large PR company, a role that would only have existed in advertising agencies until recently. She describes how data and strategy contribute to the creation of pictures for social media campaigns.

The British empire also employed PR through the Central Office of Information (COI). Drew Thompson has looked back at the COI archive to see how they chose to represent the last years of empire in Africa. He finds they give a partial and unrepresentative view of life under British rule, their photographs often as significant for what they leave out as for what they include in the frame.

In our archive portfolio we have asked historian Richard Hornsey to look at the photographs in the Boots collection. The pictures include many different PR functions including those made for The Beacon, the in-house magazine which was used to foster a sense of community amongst staff. Shareholder albums from the 1930s reveal images emphasising the modernity, cleanliness and sophistication of factories. Finally, in the post war period he explores how Boots used photographs to ensure visual uniformity across its branches to secure the firm’s identity in the eyes of its customers.

The artist Josephine Pryde is in conversation with the writer Michelle Henning. Pryde’s images often resemble photographs made for a range of different applications including advertising and fashion. They discuss the mutability of images and consider how idioms from these different spheres of practice have come together in clashing or overlapping ways.

The artist Les Levine has recently reworked his images made in Northern Ireland in the early 1970s for a new exhibition at the Irish Museum of Modern Art. Speaking to Colin Graham he discusses his experience of negotiating the daily briefings for journalists by the British information service during the Troubles. Levine’s approach, often working inside people’s homes, was counter to the party line and the standard images of explosions that were being produced for the evening news.