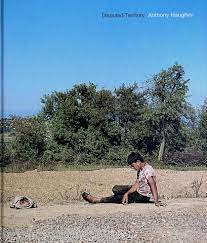 Anthony Haughey’s Disputed Territory series investigates the continuing conflict over territory, rights and ownership of land in Europe. What makes this significant is that such a focus is too often dissolved in a lazy rhetoric of globalisation i.e. borders don’t mean anything anymore. Whilst borders have moved throughout history, their meaning and function in flux, their consequence as a power effect remains. Haughey has been living and working near the border between Northern Ireland and the Republic for a number of years. At the height of the conflict, it was the most heavily militarised and monitored zone outside of the Eastern Bloc and yet for most of it the demarcation between the two jurisdictions continues to be almost invisible. Without recourse to maps, themselves unreliable forms of representation, determining one territory from another is a tricky and difficult task. These images of the environment and landscape not only represent the sites and spaces themselves but also indicate the social, cultural and political stakes involved where two different states and at least two different communities perceive the same landscape in very different terms. This is accomplished by the foregrounding of markers, objects and signs whose status and significance is not always precise or conclusive but which requires a more complex form of reading which politicises the landscape as territory.

This series has extended to the Balkans, examining Bosnia and Kosovo for similar signs of conflict. This is not to level them to sameness but to draw out the human costs of war and the extremities that people are driven to in the most urgent of times. Furthermore, it suggests that territorial claims are an ongoing political reality in the new integrating Europe that is not likely to go away. As in his images from Ireland, Haughey eschews the spectacular and decisive ‘moment’, instead representing that time after the storm of war, murder and ethnic cleansing. These images represent the aftershock; the trace of acts and deeds which are almost unrepresentable. Haughey’s images indicate a profound unease directing attention to the horror of what has gone on before and the aftermath with which we must now deal. In these images of debris after the acts of terror, there is a demand that we remember that remembrance and forgetting are hardly innocent and neutral acts but always contain a powerful political charge that refuses to dissipate. The photographs serve as a kind of afterimage seared on the retina of memory which provide a forceful metaphor for the complex and difficult task of addressing the history of conflict.1

Anthony Haughey lives and works in Ireland. He is an artist and lecturer/researcher in the School of Media at the Dublin Institute of Technology.

The Gallery of Photography is a photography gallery and shop with darkrooms and digital imaging facilities, located in Dublin.